A great film you have probably never seen before: 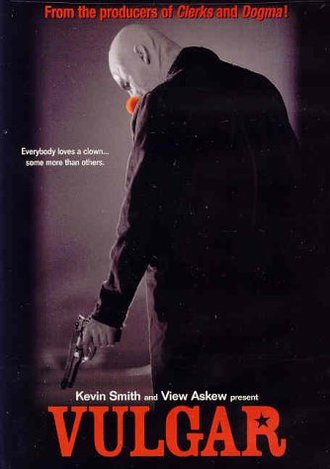 Vulgar by name, vulgar in content. Don't let the light hearted nature of the trailer trick you into thinking this is your run-of-the-mill Kevin Smith comedy in the vain of Clerks, Mallrats or Jay and Silent Bob Strike Back. This is in fact a very dark rape and revenge film with a few light hearted elements thrown in for good measure.

It was produced by Kevin Smith and directed by his friend Bryan Johnson on a shoestring budget so if you are looking for the Transformers or The Avengers I suggest you stop reading and leave right now.

The film tells the story of Will Carson (Brian O'Halloran from Clerks), a 20 something loser who lives in a rundown neighbourhood where he works as a kid's party clown called 'Flappy' in order to pay the rent for his abusive mother's nursing home as well as his own mounting bills. It is obvious to the audience that Will is a good guy and gets genuine satisfaction from making the children happy.
However, struggling with his bills he invents the 'Vulgar' persona: a stripper clown who will get paid to attend bachelor parties as a joke. On his first job as 'Vulgar' he is brutally raped by a man and his two demented sons. This obviously sends Will spiraling into a depression which sees him isolating himself and smashing up his abode. He eventually leaves his house in order to fulfill an obligation to attend a child's party. After a heroic act in which he rescues the child from a hostage situation Will's luck begins to change. The publicity from the rescue lands 'Flappy' a prime-time TV slot. It's not long though until Will's past catches up with him as the 'rapists' begin to blackmail Will with the threat of an edited video of his rape being made public. Will is forced to put an end to this blackmail by any means necessary.

You are probably wondering 'How could anything about this be humourous?' The truth is that it is not.  It's a dark and disturbing drama turned revenge thriller. The film is depressing and whenever things begin to look up for Will he is hit with more crippling blows. The comedy aspect, I suppose, comes from some of the dialogue and situations revolving around smaller characters. There are a number of fairly amusing bums that set up base out of Will's house who are always up to mischief as well as some appearances from certain actors that Kevin Smith fans will be familiar with including Kevin Smith himself as a homosexual Television producer.

What I personally liked about the film was its originality. I mean how many rape revenge comedies can you think of? Let alone rape revenge comedies where the main protagonist is a children's party clown. The dialogue keeps you interested and entertained and is reminiscent of Smith's earlier work. For such a low budget film it is quite nicely shot (the rape scenes are done fairly artistically in my opinion) The film pushes the boundaries and is not afraid to explore the darker side of the human psyche. The very things I liked about the film, however, can also be to blame for the film's poor reception. The film currently holds the dismal rating of 23% on rotten tomatoes. I do feel that quite a lot of people missed the point and decided to fixate on the rape aspect. The film itself doesn't dwell that much on the incident but focuses a lot more on the aftermath: what life is like for a victim of such a horrific crime. The comedic aspects are thrown in to give a realistic portrayal of life  and some of the ridiculous situations people find themselves in from day to day. It is actually quite moving and deep but I will quote some of the reviews so you can get an idea of what people didn't like about it and decide for yourself if you think it is for you: (personally these reviews jsut made me want to see it even more to see what the fuss was about)

'Unspeakable, of course, barely begins to describe the plot and its complications. Vulgar is too optimistic a title.'

So from reading those comments it's safe to say this movie is not for everyone. In fact its safe to say that it's hardly for anyone. But if you like your comedy blacker than a priest's sock or are looking for a film that is not afraid to push the boundaries of decency and taste whilst still managing to evoke some genuine empathy  then you might find that you are part of the small minority, like myself ,that will actually enjoy or even love Vulgar!