A GREAT FILM YOU HAVE PROBABLY NEVER SEEN: 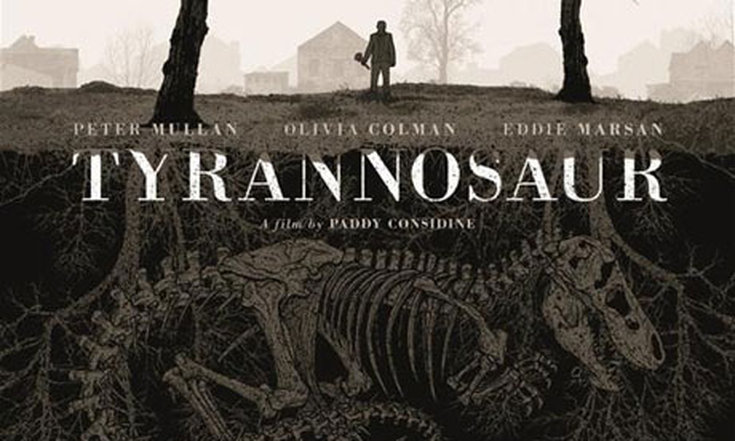 This week’s feature is on Paddy Considine’s first feature length film ‘Tyrannosaur’. Unlike last week’s great film you have probably never seen before: ‘stitches’, which was riotously fun and ridiculously gory, this week’s edition is cold, dark and thoroughly depressing.

Tyrannosaur focus’s on Joe, a widower, who is a bitter man fuelled by rage and alcohol. His life is going no where and he knows it but no matter how hard he tries he is unable to escape the brutal anger which engulfs him.

One day, to escape the trouble filled world which he created for himself, he seeks refuge in a charity shop and after several revisits he gradually befriends the store owner Hannah. Hannah  appears to be the polar opposite of Joe. She is a softly spoken devout Christian. Despite Joe’s rudeness and his unwillingness to open up, Hannah does not give in until she has broken through his defensive guards and gotten thought to the real him.

Now this may seem like a typical soppy love story but in fact it’s the multiple subplots and twists which make this film truly incredible. Hannah is married to an abusive and violent husband whose behaviour, along with many other trials and tribulations Joe has to undergo throughout the film, constantly throw Joe back into the hate filled life he is so desperate to escape.

Hannah herself is just as an interesting character as Joe. She creates an entire set of reasoning and logic to explain why she tolerates the abuse and humiliation she has to endure daily. She gives her life to God, perhaps in hope of a better after life or even perhaps to make her cowardly nature come across as a forgiving nature.

The film is a very difficult watch and contains some absolutely brutal and horrific scenes including one very graphic scene in which Joe takes his rage out on his pet dog. There are very few glimmers of happiness and the film is very realistically shot and acted. There are no special effects or attractive A list actors. This is almost like a documentary of some of the most miserable people in North England’s council estates (where this film is set)

This review may seem very off putting but the character development is truly amazing making you honestly  care what happens to these people, almost as if they were your own family. You wish you could do something to help them but there is nothing you can do (very much like in real life). It may not be everyone’s cup of tea and the brutal realism of the depicted violence and abuse is difficult for even the most avid extreme cinema fans to stomach but if you want something that really engages you with the story and the characters then I highly recommend 'Tyrannosaur'.