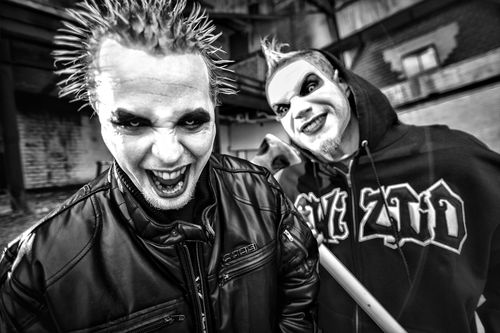 I know I’m a bit late on this but it’s taken me a while to finally get round to doing this so I apologize for that.

On July 30th the demented duo known as Twiztid released their first album since leaving Psychopathic records. For that reason alone (not to mention the overwhelmingly positive response to their last album: Abominationz) the expectations were high and the pressure was on. Can Twiztid make it without psychopathic? Will this live up toe their previous work?

Unfortunately at this point there is no clear answer. Twiztid have referred to a ‘New nightmare’ as a Mixtape so it would be unfair to treat it as a proper full length studio album. There are some moments of pure brilliance that only Twiztid know how to deliver but there are also a few low moments and a hell of a lot of guests appearances which is both a good and bad thing. I will break it down track by track to help give a more accurate review:

Wake Me Up – just a short introduction that’s not really worth talking about or rating.

Down with us ft. Wrekonize of Mayday – This is a brilliant opening track. There has been a bit of speculation as to whether or not some of the lyrics are pop shots aimed at ICP. Speculation aside this is just a really good classic Twiztid style track that fans of the group will love. Wrekonize provides the hook which is cool but it would have been nice to hear him drop a verse as well. Paul and Jamie’s flow and the beat are hard hitting and the end result is a good head nod kind of song that would sound great being bumped in your car. (5 out of 5)
Unjust Love ft. Mickey Avalon & Danny Boone of Rehab – This song sees Twiztid getting dark with their lyrics, talking about stalking their unrequited love interest. Lyrics like ‘I wanna wear her skin like buffalo bill’ immediately puts to rest the speculation that Twiztid intended to go ‘mainstream’ after leaving Psychopathic. The theme of the song is interesting and will give their horrorcore fanbase something to be happy about. The chorus and beat fit well with the theme but there just seems to be something with this I can’t put my finger on that stops it being a top Twiztid track. Danny Boone’s short vocal bridge is a nice change in style to keep the song interesting. For the life of me I don’t know what Mickey Avalon contributed to this song apart from a few spoken words. Maybe someone can point out what I’m missing? (3.5 out of 5)

The Deep End ft. Caskey – Another dark song from Twiztid. The eerie music creates a sense of despair and desperation which is echoed by Jamie and Paul’s dark and sombre lyrical delivery. Jamie’s voice seems slightly different to normal and not really in a good way. Caskey provides a great verse that makes me eager to hear more from him in the future. The main problem I have with this song is the chorus from Dominic. I find it boring and almost annoying to listen to which ruins an otherwise good song. (3 out of 5)

Sick Man ft Blaze – By this point Twiztid have fully put to rest any notion that this is anything but a Twiztid record. This is another dark song that reminds me of some of the later Dark Lotus songs. The song is about being mentally disturbed and the Dark Lotus style is enforced with a welcome guest verse form long-time affiliate Blaze Ya Dead Homie. (3.5 out of 4)

Screaming Out ft. Dominic & Irv Da Phenom – Dominic provides another chorus on this song and again I just don’t like it. I think it must be his voice but again I find it boring. Twiztid’s dark rhymes are on point and Irv Da Phenom provides a brilliant verse, those aspects along with a great beat make this a good song. It’s just too bad about the chorus (3 out of 5)

Wasted Ft. Blaze, Buckshot, Lil' Wyte, Jonny Richter, Jellyroll, Jahred of Hed Pe, Liquid assassin, Ajax – This is a big collaboration song about getting wasted. It acts as a nice change of theme and pace for the album and is a decent track. The beat is a bit sub par in my opinion though. The highlights on this track for me are Jamie Madrox’s rapid fire delivery, Lil’ Wyte’s aggressive southern drawl and lyrics about complete excess and Jahred’s shout-rap verse and amusing spoken word ending. The song suffers from being a bit too long and a few weak guest appearances but is a good track overall and I could imagine it going it down well live with it’s anthemic chorus. (3 out of 5)

Falling Down ft Swollen Members – I really like this song. Twiztid ride the smooth piano and string driven beat perfectly with their heartfelt and sentimental lyrics. Mad Child’s verse also works well and fits seamlessly with Twiztid as if he was an actual member. Prevail flips it up and spits a quick double speed verse that keeps the song interesting. I think this song will appeal to both fans of Swollen Members and Twiztid alike. (4.5 out of 5)

Monstrosity ft ROC– This is the long awaited return of House of krazees. (Twiztid + ROC = House of Krazees). The beat is hard hitting and chaotic much like the lyrics and delivery. It’s a promising sign of things to come and the ROC comes correct. It’s a little bit too chaotic at times and sounds a little disjointed but is a decent hardcore/horrorcore song that will keep old skool fans happy. (4 out of 5)