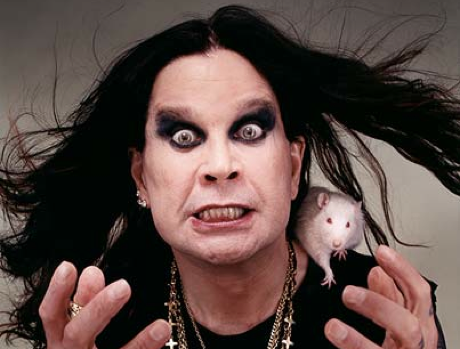 Art foundation K Foundation (aka The KLF), comprising of ex musicians Bill Drummond and Jimmy Cauty, shocked and stunned the world in 1994 when they decided to BURN the remainder of all the money they had made in the music industry which came to a total of ONE MILLION POUNDS. The action took place on the Scottish isle of Jura and was then shown in theatres around UK. The duo stated, “We were just sitting in a cafe talking about what we were going to spend the money on and then we decided it would be better if we burned it.”  As you do...

4. Ozzy Osbourne bites the head off of a bat

At a show in 1984 In Iowa a crowd member threw a live bat onto the stage. Thinking it was a rubber one Ozzy went on to bite the head off the mammal. The aftermath resulted in Ozzy needing a rabies shot! The incident has gone down in rock history and has helped Ozzy secure his position as the prince of darkness!

30 years after the original Woodstock event. Woodstock 99 was held in New York and boasted what is possibly the greatest festival lineup of all time. Rage Against the Machine, insane Clown Posse, KoRn, Kid Rock, Everlast, Chemical Brothers, Offspring, Metallica, Ice Cube, Limp Bizkit were just some of the great names that played the event. Unfortunately the festival descended into pure carnage. It was torn apart by over-excited revellers during Limp Bizkit’s ‘Break stuff’, huge fires were started during Red Hot Chilli Peppers cover of Jimi Hendrix’s ‘Fire’.  There was also widespread intoxication, violence,  and drug abuse throughout the entire festival and several reported rapes which led to the media dubbing the festival ‘rapestock’ and calling it ‘the day music died’.

Sid Vicious: controversial bassist of the legendary punk band the Sex Pistols, whose life had been surrounded with drugs and violence, woke up on the morning of October 12th 1978 to find his girlfriend Nancy dead from a stab wound. All evidence pointed at Sid as the murderer but he was ‘too high’ to remember anything that happened. Unfortunately Sid died of an accidental heroin overdose before the verdict was ever heard and the case remains unsolved but the story lives on and is remembered as one of the most shocking moments in the history of rock music!

Everything about GG Allin was shocking. Much like the Ol’ Dirty Bastard (see top 5 shocking moments in hip hop) there is just too much about GG Allin’s life to come up with one shocking moment. From his insane live shows featuring self-mutilation, nudity, fights with audience members and defecation to his time in prison for 'assault with intent to do great bodily harm less than murder' where he admitted to cutting, burning, and drinking the blood of a female fan, but insisted she did the same thing to him, Everything about his life was outrageous and chaotic. His death and funeral were no exception.

He died of a heroin overdose and at his funeral, Allin's bloated, discoloured corpse was dressed in his black leather jacket and trademark jock strap. He had a bottle of Jim Bean beside him in his casket, per his wishes .The mortician was instructed not to wash the corpse (which smelled strongly of faeces), or apply any makeup. Allin's funeral became a full on party where his friends posed with his corpse, placing drugs and whiskey into his mouth
Written by Matt Watkins
Published 28/09/13
HOME
Comment Box is loading comments...
Powered by