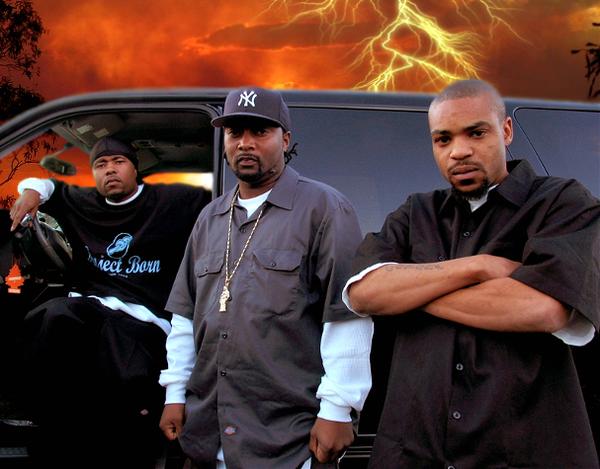 Project Born: The very first group to be signed to the Insane Clown Posse's Psychopathic Records way back in '94, recently announced they will be releasing a 'best of'compilation cd on October 29th. The album will contain 30 tracks spanning their 20 year career and 2 previously unrealesed songs. Darkside Newz was able to catchup with Project Born member Frank Nitty and conduct this cool informative interview. Check it out:

Hey, Thanks a lot for taking the time to do this interview. For those readers not familiar with PJB, Do you want to give a brief description of what it is you guys are about?

No problem man anytime. Well we are a group up out of flint Michigan we started rapping back in 92 we jumped in the game with a track called loosing it with esham and signed to psychopathic in 95 we were the first group on psychopathic. And 21 years later still gojng

It has been recently announced that you will be releasing a ‘best of’ Album on the 29th October. After 20 odd years in the industry why have you decided that now the timing is right for this compilation?

Well its time because we want to give our long term fans and some of our new fans a piece of our life and our legacy, what better way than to do that with the 'best of': a whole collection of hits old and new. After 20 years it was time!

The album is being released through anti-authority records. How did that deal come about and do you have any plans to release any new material on the label?

Tea it was crazy how this came abou,t my homie delusional brought up the idea and we had been chopping it up for a minute already about working on something and this just came to life and we have some plans to do more work in the future, just stay tuned.

What do you think you have learnt from your experiences in the music industry? Is there anything you would do differently if you had the chance?

I learned a lot! First of all u can't trust no one. When money is involved all bets are off! You know there's no loyalty anymore and you can never take nothing for granted. If it's a possibility it could happen consider it. I wouldn't have done much different in my career, I have met a bunch of people, made a lot of friends and I'm well respected and an underground legend so I did great but I might have  rode it out with psychopathic a lot longer if could have changed that part. You know they were like FAM.

How has Project Born evolved?

We grew up! We have become better with each album, we have been in almost every era and we adapt to the change of music and keep our style with it.
You have recently been getting a bit more involved with Psychopathic again (playing at the Gathering and Opening for ICP at the Riddlebox show) is there any future Psychopathic/Project born collaborations in the pipeline?

I don't know, I hope so. We do great work together. You know ICP, them my homies ,I got mad love for them so I hope we can drop another classic on the world!

If Psychopathic rang you up today and offered you a new deal do you think you would take it?

Probably, It would be hella fresh to rejoin the family and go at the world again and drop killer music.

If you could work with any artist, no matter how big, who would it be?

f I could work with any artist it would be probably tech nine or Eminem I believe they are 2 of the best lyrically in the game so it would be interesting to work with either.

You will be touring with Twisted Insane in October, have you met him before and what do you think of his music?

I have never met Twisted Insane but I heard his music, I like it, he gets it in on them vocals, he the truth.

Do you think there is ever any chance of you playing any shows in the UK?

I hope, I wish but getting overseas would be a problem for me because of a few felonies I retrieved when I was younger but I would really like to go overseas period. I heard it's a whole different lifestyle over there so I would love to come that way.

It seems that all the darkest hip hop seems to come from the state of Michigan (PJB, Prozak, King Gordy, D12, Insane Clown Posse, Twiztid, Esham , Dayton Family etc.) what do you think it is about Michigan that inspires such dark music?

Michigan is a state of survival, this ain't the easiest place to live man, between crime and unemployment it makes this place vicious, it really does. We have a lot of darkness to write about and it's typical days for a lot of us growing up. It's evil up here man.

Who are your biggest inspirations as a recording artist?

If you weren't in the music business right now what do you think you would be doing with your life?

I would probably be in school earning a degree which I plan on doing next year when I retire. I'm a get a bachelors in accounting and go to law school.

Having personally been involved in the Juggalo seen what are your opinions on the FBI classifying Juggalos as a gang up there with the Bloods and the Crips?

They are mistaken big time! Juggalos are family. I have came up with this family from beginning to end and that was, I say, the biggest misconception ever and its crazy they could even come up with some bs like that.
Ok now I am going to finish up with some random multiple choice questions:

Family Guy or The Simpsons?

Thanks a lot for taking the time to answer these questions is there anything you would like to add to the Darkside Newz readers here in the UK?

O tea I want to thank y'all first and foremost for taking the time out to interview me. I'm honored - big up to Darkside newz! I want to shout out my homies Young Lyte, Young Sun, Maniac and the monster family, Midwest money, delusional and Tj at anti authority record,s jimmy Donn and all my sic fuc family out in Minnesota, ICP, my big homie bizarre from d12, king gordy, Dayton family and all my project family, river park raise up and to all my juggalo family I love y'all! I mean that and be on the look out for the 'best of' project born album, born dead 3 album, me and delusional album, bird vs magic mix tape with my boy young Lyte, just stay posted it's going to be a wild ride into retirement! This is my last year in the game and I'm going out with a bang!