A Great film you have probably never seen before: 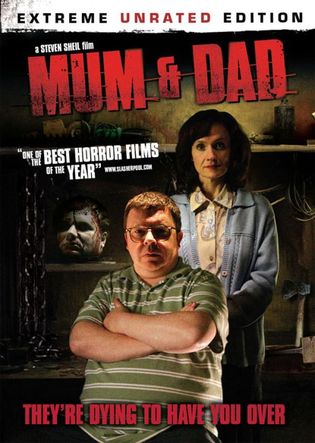 This weeks great film you have probably never seen is Steven Sheil's disturbing directorial debut 'Mum and Dad'. This low budget British horror takes the torture-porn sub-genre, seen in the likes of Hostel and Saw, and brings it to a whole new level. The film is typically British in its gritty and sinister presentation and even has a few fleeting moments of dark humour which may be lost on some of our friends across the pond. The overall tone, however, is dark, twisted and at times hard to watch.

Lena, a polish immigrant working at Heathrow airport, befriends a fellow worker named Birdie, Birdie brings Lena back to her home after she misses her last bus home from work. Once inside Lena becomes imprisoned by Birdie's 'Mum' and 'Dad' and is forced to become part of the 'family' and join them in their insanity or be killed.  Whilst a prisoner shes is subjected to some of the most severe mental and physical torture possible. 'Mum' (played by Dido Miles) likes to 'play' with her adopted children by carving patterns into their backs which seems to give her some sort of sexual gratification whereas 'Dad' is the disciplinarian: if Lena dares to disobey or disrespect him he teaches her a lesson in the most brutal of ways. The film is not as violent or gory as Saw or Hostel but the subject matter and overall feeling you get from watching this films is far more disturbing in my opinion. It's the type of film that makes you feel like you need a shower after watching and you feel almost guilty for enjoying the film so much.

Like most of the films I recommend in these features, it is definitely not for everyone. The reason it didn't break into the mainstream is fairly obvious. It is sickening and controversial but what makes this film even scarier is that despite the seemingly ludicrous plot it is actually reminiscent of real life cases from the not too distant past.

The transformation in Lena from quiet reserved immigrant to brutal scheming warrior literally fighting for survial is brilliantly portrayed by Olga Fedori. For such a low budget film there's really not much I can think of that would have improved the film. The story is well constructed and what it lacks in character development and back stories it more than makes up for with engrossing and and sometimes entertaining interactions between the dysfunctional family members. Despite the dark tone of the movie there is the odd element of humour to be found. An example of this humour can be seen in the Christmas scene which looks like what you would get if you spent Christmas with the cast of 'Shameless' if they were serial killers and causually had a disembowelled stranger crucified in their living room.

If you a fan of horror movies that are on the slightly more extreme end of the spectrum I highly recommend 'Mum and Dad'. The cinematogrpahy, writing, acting and directing are all top notch and a fine example of how to make a decent flick on a small budget. To find out more about director Steven Sheil check out ouur interview.