Interview with the NYC reggae-rap stoner MenacE who was the first artist to be featured in the Darkside Newz  'Underground' Spotlight'
Hey, thanks a lot for taking the time to do this interview. For the people out there who might not be familiar with MenacE do you want to give us a little overview of what it is you are about?

No problem brother it's my pleasure.  It's hard for me to imagine there are people who aren't familiar with me at this point given the overwhelmingly inviting and seductive sex appeal I possess but unfortunately there are many who are still not aware.  My sound is a fusion of hip hop and reggae, I'm sort of the bridge between those two worlds.  Like if Sublime and Eminem had drunken unprotected sex, I would be the love child.  Growing up I was always into the whole California reggae-rock scene, and while a lot of those bands mix hip hop with their sound, I always felt that they all had a more rock n roll approach over all.  Even to this day bands like "The Dirty Heads"; those dudes rap and they're both awesome MC's but most people would view them overall as a rock band.  So I always felt there was never a solo artist or a real "reggae-rapper" if you will and I felt compelled to fill that void and mix it with comedy and pop among other things along the way.  I don't think I consciously am "about" something or stand for anything as an artist but I enjoy encouraging people to not take themselves so seriously, to loosen up, smile and laugh at things a little more.

You got your first taste of the music industry as a roadie for Shootyz Groove, what do you think you learned from that experience and would you say it has had any impact on you as an artist?

That has an insane amount of impact on me as an artist.  First of all Shootyz Groove is one of the most underrated bands in the history of music, period, especially when it comes to the live performance aspect.  They were among the first wave of bands to mix rap and rock in the early 90's, a scene which didn't really break on a huge commercial level until the late 90's, but in my opinion they were the truest and purest form of "Rap/Rock', and still are to this day.  They were doing a show with Kottonmouth Kings when I met them, they had broken up some years before that but were getting back together performing shows at their fans request.  They had quite a few gigs lined up and they needed some extra hands on the road so I jumped at the opportunity.  I didn't really know much about them but I soon realized how much respect they had in the game.  So many big bands and industry people know and respect them very much.  311 took them out on the road when they heard they were back together and that was a crazy trip for me to be behind the scenes on a tour like that at such a young age.  Aside from all of that the guys in Shootyz Groove are incredibly smart and have sort of become mentors to me.  Aside from music they have sort of become like big brothers to me on a personal basis.  We still talk frequently to this day,  Dose Big actually played a ton of shit on my album, keys, percussion, guitar etc.

Your last album 'Too hip for the room' has been out for a while now, have you been happy with the response to that?

No I'm not happy at all.  I want to sell millions of albums so I can live in a mansion and pass out on a float in my pool with an empty bottle of Jack Daniels floating next to me in the water, at 12 noon.  Until then I will never be happy.

It features a guest appearance from 'Uzimon' can you let us know a bit about him and how that collaboration came about?

- Well in a nutshell Uzimon is the world's biggest celebrity, he shoots bullets out of his mouth and he seems to impregnate women where ever he goes.  We're a match made in heaven.

It also has some skits from the Jerky Boys. What inspired you to approach them?

I've been a huge fan of The Jerky Boys since I was a kid.  The fact that they are from Queens NY really made me want them to be a part of it.  We are literally from the same neighborhood and I just thought it would be so fitting to have them on there because of that and because they fit the whole sarcastic tone my approach as a vocalist has.

You have played with some true legends in the game from Ice T and Slick Rick to Fishbone who is the coolest 'celebrity' you have met?

Uzimon
It was pretty cool your 'Blood of the wicked' video made it to number one on Snoop Dogg's underground heat playlist. /do you
know how your video was brought to his attention? How was the ranking determined?

Yeah that was really cool, I was only anticipating it being on there for a week let alone staying on there for a month eventually reaching number one.  Snoop and a few of his boys are constantly looking for up and coming artists material to feature on the show, I sent them my stuff and they responded well to it.

You have announced you will be releasing a new album next year. Can you tell us a bit more about that?

- Yea I have an album called "Note To Self" coming out in 2014 and it's gonna be god damn awesome.  It's gonna change the entire world, its gonna bring peace to the middle east, its gonna make the entire world unite as one, everyone is gonna hold hands and make one of those human fence things around the world.  All while singing the songs on my record.

How will it differ to your old stuff?

My plan is to increase the level of production a whole lot.  I wanna make bigger sounding songs with many different parts and tempos, breakdowns etc.  "Too Hip For The Room" has way more of a hip hop approach song structure wise.  This next record will still have my laid back hip hop reggae vibe but with the song structure of pop and rock songs.  Its gonna have a lot of backround vocals, a much bigger and heavy mix and just lots and lots of ear candy in general.  Thats the plan, to really focus hard on production in every sense of the term.

You have made it known int he past that you are a fan of the Insane Clown Posse, what are your opinions on the FBI's  decision to classify Juggalos as a gang up there with the Bloods and the Crips?

I love Insane Clown Posse and I love their legacy in the music industry just as much.  I think the FBI classifying them as a gang is ridiculous and really over the top.  I mean its clear that these kids are just really big fans of a band, that's all that's happening.  Maybe if Juggalos were starting to cut in on drug dealing and had the same organization and rules that the bloods and crips have then I could see, but just because a bunch of kids are painting their faces and screaming "whoop whoop" every three seconds doesn't mean they're a gang.

Have you ever been to the Gathering of the Juggalos?

Yeah I've been to the Gathering and its one of the most moving experiences I've ever been a part of.

What other artists are you feeling at the moment?

As far as current artists I like "Wax" a lot, its amazing how he really capitalized on the YouTube thing.  Danny Brown is pretty entertaining, John Brown's Body is a band that are really pushing the boundaries of reggae music at the moment I think.  There are some kids close to my area called "The Warden and FAME" who I think have a great vibe and are something to look out for.

Your also a big advocate for marijuana use, what is about the 'erb that you like so much and do you think it would be a good idea to legalize it completely?

Words can't even express my love for the herb, its hard to describe what I like about it so much.  It's an all natural form of relaxation.  Aside from that it's become a culture and way of life.  Of course it would be a good idea to legalize it, the amount of reasons as to why it would be a good idea is so overwhelming at this point that its embarrassing that we can't just get this over with and move on.  If alcohol is OK then Marijuana should be OK, and that may be a cliche and age old argument at this point but to me its the only argument you need.  It's a shame that a man who smokes a few joints every night can't get a job with benefits and a pension but a man who drinks a six pack of beer every night can.

Do you have any plans to come and play in the UK?

I would love to come and play in the U.K., the right opportunity has to come along to do so.
I will finish with some random multiple choice question:

- Although some may argue that there is no Snoop without Dre, which may be true, Im goin with Snoop.

Thanks again for doing this, Is there any thing else you would like to add to the readers of Darkside Newz?

If you like what I do tell a friend, tell a promoter, tell your fuckin' grandmother, just as long as you tell someone......and buy a T-Shirt.  Oh and thank you for your time. 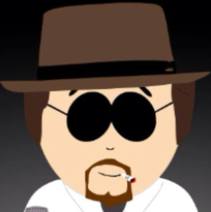