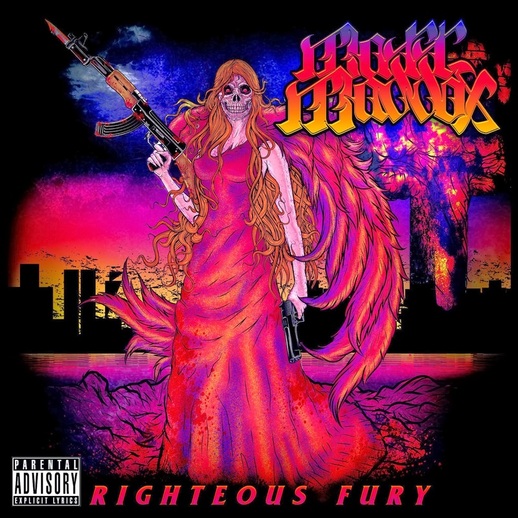 Matt Maddox is no stranger to the world of hip hop having been rhyming since the 3rd grade and his love for the craft is apparent throughout his latest release ‘Righteous Fury’ which hit the stores yesterday. The album, a 19 track onslaught of uncompromising rough and rugged underground hip-hop in the vein of Jedi Mind Tricks or early Mobb Deep, kicks off with the powerful and staggeringly unsubtle No Country for Old Men.

The song calls out the posturing of contemporary rap superstars ‘shit has changed, fakeness now makes it as truth’ while paying homage to the true MCs of the past such as ‘Wu Tang, Big L, KRS and Nas’. This disdain towards the bastardization of the genre he so clearly loves is a recurring theme throughout the album which, at one point, even sees him calling Lil' B a ‘Faggot Rapper’ on the track Murder Weapon.

The album is a nostalgic foray into the 90’s golden era of hip hop and our tour guide on this trip down memory lane, Matt Maddox,  see's himself as a kind of rap anti-hero or a saviour for 'real hip hop' .

There are just enough guest features to keep the album interesting without taking the limelight away from Maddox himself. Stand out verses are provided by Battle Axe Warrior's Adlib and Army of the Pharaoh's Reef the Lost Cauze on Spider Man and it's nice to hear a familiar accent on A Pale Horse which features UK rapper Edd Bundy, who also provides the song's haunting instrumental.

Although the album certainly isn't ground breaking in any sense, the overall content is top notch. Maddox's intricate and often clever lyricism along with his gruff voice perfectly compliment the album's gritty production which is provided by underground heavyweights such as C-Lance (Jedi Mind Tricks, Madchild) and Sicknature (of Germany's Snowgoons) among others.

Fans of underground acts such as La Coka Nostra, Jedi Mind Tricks and Non Phixion will most probably get a lot of enjoyment from this record whereas fans of Drake, Lil' Wayne or Lil' B should probably stay well clear.