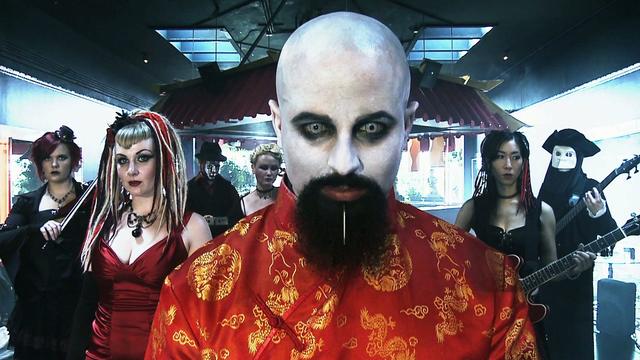 I recently caught up with the legendary Kung Fu Vampire who has been holding down in the underground for 20 odd years now having toured with the likes of ICP, Potluck, Twiztid and many more: Destroying stages across America with his unique blend of rapid fire delivery over dark music provided by a full live band.
Hey dude. You recently released ‘Turnt up’ featuring Hopsin. Is that a track from a forthcoming album or is it a stand alone single?

This song will be on the next album but with a surprise twist!

How will your next album differ from your previous stuff?

Every album I do always shows growth, this will be a big leap compared to Love Bites with lots of different flavors as always!

Recently you seem to be moving away from the ‘Vampire’ gimmick. You are dressing more casually at shows and even your lyrical content seems to be slightly more ‘normal’ is this deliberate and if so why?

I have never had a "Gimmick" I consider Kung Fu Vampire a well honed Theme that shape shifts any direction. It has gone through different stages and although Im showing people a different side of me recently, this isn't a testament to what the future holds. I may come out even crazier than ever, or dressed more like a Buddhist Monk, a robot, who knows, but you can expect the unexpected from me.

Will you continue to perform with a live band?

Always have and always will.

Was there any time in your life where you had that kind of ‘Eureka’ moment when you realized music is what you wanted to do with your life?

I think for me it's been more of a "this is all I know" kind of thing, it's what I have always done with my life. Music has been my baby for 20 years.

What do you think you would be doing if you weren't in the music business?

I would probably be selling copious amounts of Marijuana or open a Dispensary, I like Architecture so most likely flipping houses, which I may start doing anyways on the side!

You have recently toured with Insane Clown Posse and played several times at the Gathering of the Juggalos, What do you think it is about the Juggalos that makes them embrace you and your music so much?

The Juggalos are the greatest group of music supporters on the planet, if they don;t like you they will most def. let you know, If they love you, you are family. Juggalos have embraced me for many reasons but the first and for-most is that I have my own version of the "Wicked Shit" They love that I do my own thing and wasn't influenced by their favorite artists or their culture at all. It's like a long lost cousin or brother who although seems nothing like you at first, you are happy to meet them, grateful to have them in your life and you realize that you both share a lot of the same love for each other, so it's a match made in Heaven. I think Juggalos are sick of nubile rappers coming in and copying the clowns or Twiztid and trying to succeed. I'm just a loving dude, with sick thoughts and I love making dark music….they see that and respect it and the feelings are mutual.

You have played at Release parties for ‘Saw 3’ and ‘Repo! The Genetic Opera’. Are you a fan of horror movies? What is your favourite?

I love Horror, especially Thrillers or super natural. I like so many movies in the genre that i don't have a favorite. But my favorite Vampire flicks are Salems Lot & Blade. I am a big fan of anything my homie Darren Lynn Bousman puts out, he directed Saw 2, 3 and 4.

If you could collaborate with any artist in the world no matter how big who would it be?

What has been the highlight of your career so far?

Every year there seems to be new highlights, Performing at The Playboy Mansion, Touring with Twiztid & ICP, The Gathering performance in 2010 and being on the cover of the local newspaper here in the Bay Area.

Where do you see yourself in 10 years time?

Selling out arena's and making music for movies!

It would be really awesome if you played in the UK, is this something you see yourself doing in the foreseeable future?

When the right tour and opportunity comes along i will be in the UK. I love the thought of going there and meeting my European fans and I wanna make sure we do a big tour when we go there!

Cool. I will finish with some random multiple choice questions:

Thanks a lot for your time, is there anything else you would like to add to the readers of Darkside Newz here in the UK?

Thank you for having an open ear to something that seems so outlandish on the surface. Please spread the word about Kung Fu Vampire, we are truly underground and don't forget to try and make someone smile everyday!