Sorry people, I have been away for a while because I lost my laptop. But I am back now! and what a great way to announce my return that with a great new interview with legendary horrorcore pioneer and original Insane Poetry member - Cyco. 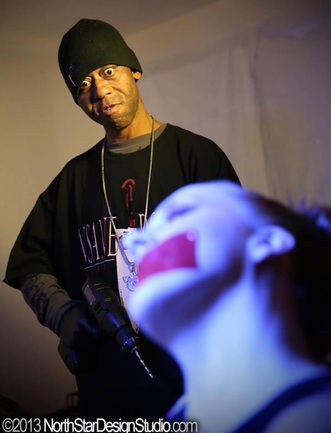 Hey thanks for taking the time to do this interview. First off for those people out there who might not familiar with Insane Poetry  do you want to give a brief overview of what it is you are about?

Insane Poetry hails from Southern Cali, It began as a group featuring Cyco, EmDee and DJ Streek. We dropped the critically
acclaimed cd " Grim Reality " on Nastymix Records in '92, some say this cd paved the way for the Horrorcore genre. Worked with Vanilla Ice on several projects of his, Mind Blowin, Hard to Swallow and Bi-Polar which features " OKS ".Other members decided on different career paths. I dropped in " Blacc Plague " in '94 which featured new IP member Da Pope.  I have dropped several projects since then, In 2003 dropped " Faith In Chaos " then in 2008 dropped " Cyco-The Snuff Reels " produced soley by Sutter Kain infusing metal and hardcore hip hop to create Ghetto Metal on Neversodeep Records, then 2009 dropped " Fallen From Grace " on my label GRE(Grim Reality Ent) co founded by JP tha Hustler and mostly produced by hiIm. In December 2010, I decided to make a complete switch and signed as an artist to LSP(Lyrikal Snuff Productions). Ive dropped " Creative Destruction-Prelude to Edgar Allan Holiman " the Mixtape and " The Best of Insane Poetry " currently working on my next mixtape " Butcher Knife Music-Shadow and Knife Glare " along with an EP " The Andrew Holiman Memoirs " and finally the full length " Edgar Allan Holiman '


You recently teamed up with Scum and have a new project called MMMFD, would you be able to tell us a bit more about that project?

Its project that was 7 years in the making. Scum is a fan of Insane Poetry, we did our first collab called " Generation Axe " that sparked him to fly me out to denver to do my first show in that state. The response went really well so we decided to do more collabs and thoughout the years we thought it would be cool to do a full length collab album but when i signed to LSP in late 2010, we felt it was time to give the fans what they had been asking for.. MMMFD((Make My Motha Fuckin Day)


You also have a new album coming out later this year called 'Edgar Allen Holiman' how is this going to differ from your previous work and do you have release date confirmed yet?

Yes I do, its gonna differ from my prior work because I am getting different producers from different regions and countries who like that dark imagery and craft their music around it. It will be like listening to an audio book from a new version of Edgar Allan Poe mixed with a twist of Chuck Palaniuk, I will have only a few features on it and because I write better songs now at this stage in my life, It will  best my effort to date, my Magnum Opus


Is there any chance of you coming over to the UK to rock some live shows in the foreseeable future?

That truly depends on the fans and promoters in the UK, I would love to play there! shout out to my UK fans who support my music!

You recently released a greatest hits album, after all these years what was it that made you feel that the timing was right for that album to finally be released?

I am at the back side my career and with being on a label that supports me, I thought with how active I am and how the climate in music has changed it was time, gave new fans a timeline of sorts.

Would you say you have evolved as an artist over the last 2 decades?

Oh no question, first of all, I always study the creativity in artists and actually learned how to write better songs instead of just writing battle rhymes all the time, secondly, being in corporate america for an occupation that required me to not only sell there products but learn marketing and advertising strategies. Because this is the music business and I am in the business of music, I started applying the same principles and my career has changed for the better.


You are one of the originators and pioneers of the horrorcore genre, does it ever get frustrating for you that when talking
about the genre people are quick to mention names like Esham, ICP and Gravediggaz as originators but your name is often left off of the list?

It could be something to worry about if i wasn't so active and fans are slowly realizing that I am just as relevant as those guys
forementioned. Also if you were to ask those guys, they would tell you that I should be mentioned along with them. I ain't hatin' on those guys, I am trying to get my weight up and build my brand and extend my legacy.

You have played the Gathering of the Juggalos before, how was that for you? Is it as crazy as everyone says it is?

I played it twice actually, the first time was in '07. We drove 35 hrs from Cali to get there to go on at 4:20pm on the 2nd stage in 100 degrees heat and had to leave the next morning so i could make it back to work so i couldnt enjoy it. But I got invited in 2012 and shit was phenomenal. I went on after ICP on saturday night. I had Tech 9 and Krizz Kaliko watch my set and show extreme love for me. We actually camped out at the gathering for the whole week, so that experience in itself was well worth it. I got treated really well by
Psychopathic that year and yes it is crazy ass hell there over 16,000 people and it was all juggalo love.

You have worked with a huge variety of artists throughout your career. One of the less expected moves was the work you
did with Vanilla Ice, how did that come about?

Vanilla Ice is actually a huge Rodney O and Joe Cooley fan to be honest, I was living and working with them at the time when Rodney and I walked into a 7-11 and read in Teen Beat(a poppy magazine) that V-Ice's fav group was my dudes. We immediately contacted his manager Tommy Quan and made arrangements to start working on his new album. We flew into Miami to meet up. We recorded his release " Mind Blowin " which I wrote 10 songs on. V-Ice really liked how focused I was and was pretty quick also. We also worked together on projects for the next 10 years. I credit him for making " OKS " reach a broader fanbase.


If you could work with anyone in the world, no matter how big, who would it be and why?

Dr. Dre, he is extremely meticulous and when he has stamped your music it's instant classic!

Do you listen to any music outside of the world of hip hop that you would say has had an impact on your music?

A lot of your music is really dark and is often like listening to a horror movie, what is your favorite horror movie?

I would say The Omen or In The Mouth of Madness, but there are countless movies I like, can't really pinpoint one actually.

Who do you think would win in a royal rumble fight between Freddy Kruegar, Jason Vorhees, Leatherface, Pinhead, Chucky, Micheal Myers, Ghostface (from Scream) and Hannibal Lecture  and how would it finish?

well Freddy, Pinhead and Micheal Myers would be the last 3 standing because they can ever die. My personal fave is Pinhead, I would want him to win it all
will finish with some random multiple choice questions:

Thanks again for doing this interview. Is there anything else you would like to add?

Please forward any requests for Insane Poetry regarding collabortions, shows and appearances to Jessyca Miller, her contact info is jessyca1222@gmail.com and you can follow Insane Poetry on twitter, facebook, reverbnation, itunes, Pandora, Spotify, and purchase all physical copies and Insane Poetry merchandise at www.gorehop.com