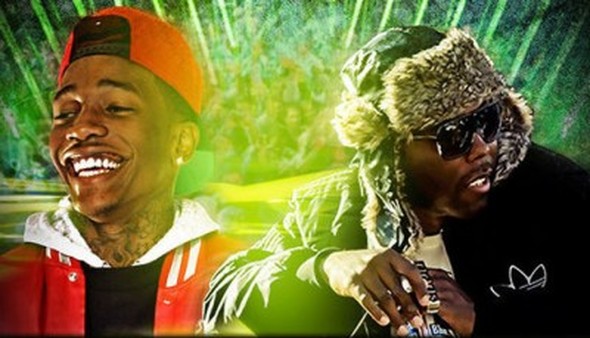 FOLLOW US ON TWITTER  @DARKSIDENEWZ
MAKE SURE YOU 'LIKE' US ON FACEBOOK AT: https://www.facebook.com/darksidenewz TO STAY UP TO DATE!!!
Funk Volume as a label and movement has been going from strength to strength recently with 2013 looking to be the biggest year for them so far. I was fortunate enough to have a quick chat with JARREN BENTON and DIZZY WRIGHT from the label to see whats poppin

You have recently released ‘My Grandma’s Basement’ how has the response been to that?

So far the response has been great. A lot of people have been showing me a lot of love for the project.

What is the reasoning behind the title?

The album captures how I was feeling when I was actually living in my Grandma’s basement. The album has a lot of personal tracks, so that’s where the name comes from.

Was there any particular time in your life when you got that kind of ‘eureka’ moment and realised that music was what you wanted to do?

You know what’s crazy, I have wanted to rap since I was a little kid, like 5 years old.

You have some great guest spots on the album including underground legends R.A The Rugged Man and Vinnie Paz. How did those collaborations come about?

If you could collaborate with any artist in the world no matter how big, who would it be?

Eddie Murphy. “My Girl Liked To Party All The Time”, the remix.

Your last release was called ‘freebasing with Kevin Bacon’ Why Kevin Bacon and If you could freebase with anyone in the world who would it be?

Is there any kind of friendly competition between you and your label mates with things like video views and record sales etc?

No, because I feel like we are all in different lanes. I try to do the best I can do and they do the same.

Where do you see yourself in the next 10 years?

A strong household name in the music industry, dabbling in all genres of music. A force to be reckoned with. And rich as fuck.

How did you go about getting signed to Funk Volume? Did they approach you or did you approach them?

They approached me. A fan posted my “Skitzo” video to Hopsin’s Facebook page, and he checked it out. He liked it, showed it to Dame, and Dame reached out to me. We established a relationship, and now here we are.

What is THE craziest experience you have ever had in your career in the music industry?

I haven’t had any crazy experience yet. Stay tuned.

The Golden Age for me is life, a movement the beginning to something new that hasn't been done. Not knowing where hip hop would be is what made hip hop what it is, the people speaking up about things that were important opened lanes for me to come in an play around. I'm gonna try to be that important voice - that brings the substance back in a golden age way.

You had a pretty impressive array of guests on your mixtape including the entire Funk Volume family as well as Wyclef Jean.  If you could work with anyone in the whole world no matter how big who would it be?

What has been the highlight of your career so far?

The highlight of my career has been the XXL cover

Where do you see yourself in 10 years?

In 10 years i see myself raising my kids, still working on music and growing marijuana in a secret location with my friends.

You have just come back from playing at the Gathering of The Juggalos. How was that for you? I hear it’s pretty crazy but I know the Juggalos have mad love for Funk Volume.

It was cool, they showed me lots of love - we smoked weed, we smoked lots of weed. It was crazy,it was different!

If you were a fictional character who do you think you would be and why?

I would probably be (long pause and laughter) I would be the little guy Diego from Dora the Explorer, my daughter loves him and that show.

Do you have any plans to come back here to the UK?

Who are you feeling at the moment in the hip hop scene?