20 years after ‘Jump Around’, the international superhit released in his House of Pain days, Everlast is still doing what he does best: making music and putting on one hell of a show. 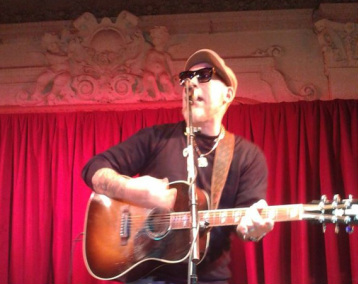 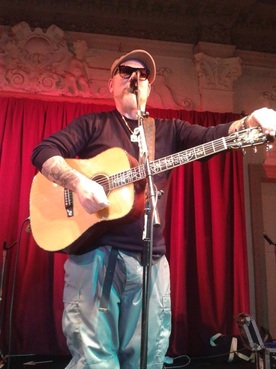 The setting for tonight’s sold out event is West London’s ‘Bush Hall’. The pillars, chandeliers and red theatre style stage curtains give it a nice 1920s ballroom charm and the great acoustics of the venue work perfectly with the low key, laid-back tone of tonight’s performance in support of his latest album ‘Life Acoustic’.

There are no pyrotechnics, fancy lighting or backing dancers. Instead Everlast is joined on stage by nothing more than a microphone, his trusty acoustic guitar and a keyboard player and we are treated to a stripped down and raw greatest hits set. The lack of distractions gives Everlast the opportunity to mesmerize the audience with his gruff yet soulful and soothing voice. He pours his heart out and lays his emotions bare over guitar riffs that seamlessly jump between hip hop, country, rock and blues without ever disrupting the flow and overall tone of the set.

He appears confident and content in the intimate surroundings and is at is at ease with the fans even engaging in some playful banter with the audience until he is told by the keyboardist ‘to stop feeding the lion’ after straying from the planned set list  to take audience requests which gradually become more and more obscure.
Even 25 years into his career the fun factor still remains a huge part of the show. After a flawless acoustic rendition of ‘Jump Around’: the track that put Everlast on the map you would be hard pressed to find a single person in the venue that wasn't sporting a grin from ear to ear, including Ev himself. The lack of energy and physical movement is replaced by pure passion and talent. What we see tonight is an artist who may be passed the days of ‘Jumping around’ but is musically and creatively at the top of his game.