I managed to conduct an informative interview with the International Hardcore Superstar himself Danny Diablo AKA Lord Ezec, known for his role in numerous seminal Hardcore bands including Skarhead, Icepick and Crown of Thornz aswell as his solo rap career and his work with countless underground legends ranging from Necro and Everlast to Madball and Hatebreed. 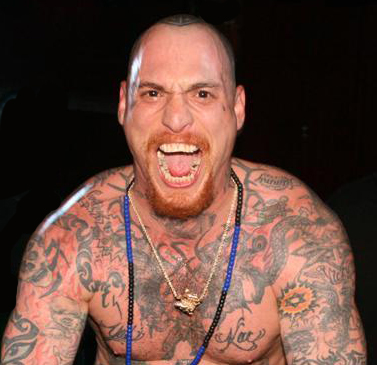 Fist off, I wanna thank you for taking the time to do this, it an honour. For the readers of Darkside Newz here in the UK and across the world that for some reason might not be familiar with you or your music would you be able to just give us a quick overview of what it is you are all about?

My name is Danny Diablo.  I'm an International Hardcore Superstar!!!

You’ve been in countless bands throughout the years but the one movement that seems to have stayed pretty much constant throughout your career is the DMS crew. What exactly is DMS? Who is apart of it and what makes it so special?

DMS is a brotherhood brought together by music.  A lot of people say it is a gang or an criminal organization but I call it a brotherhood.  It started in the N.Y.H.C seen in the mid 80's.  We have a great deal of talent in the crew and have actors, rappers, hardcore groups, metal groups, dj's, producers, directors,graffiti artist, xtc...  You get the picture!!!

You are known to dabble in various different genres in your music. Has this ever resulted in alienating a particular fanbase. E.g. do the hardcore kids ever feel betrayed by your foray into hip hop or do you find it hard to be accepted in the hip hop scene due to your connections with the Hardcore and Metal scene?

I find that the hardcore kids from real urban cities are the ones who really give me props but the wack kids from the subburbs are the ones who talk shit on the internet.  Mostly ignorant people love to talk shit from the internet.  Sad. I love metal but the so called new Metal heads are the worst.  Closed minded & racist... I am Puerto Rican and Jewish and it is sad how many rascist assholes are ou there in the world.  The Hardcore scene is my true scene!!!  I was into rap,graffiti and Metal before hardcore also...

You have worked with countless people in rock and hip hop including underground legends like Madball, Everlast, Necro, Jamey Jasta, Tim Armstrong and Madchild... Is there anyone else left out there who you would love to work with who you have not yet had the chance to?

I would love to work with Citizen Cope, Thirsten Howl the 3rd & Bjork.

Your latest solo project is the Blood of Eden, how would you say that this album differs from your older solo work such as Thugcore for life?

The Blood of Eden is a straight rap record.  My rap game is mad on point on this record.  I did a video for like half the songs on the record also!!!  Released one VIDEO ever 2 months!!!  I put it out on DURTY MICK RECORDS/ ILL-ROC RECORDS.  I am very proud of this record!!!  My son also sings a song on the record called "HITLER IS A JERK" and I am very proud of him cause he was like 2 1/2 when he sang it!!!

You are currently working on a project I believe is tentatively titled ‘knuckle Draggers’ would you be able to elaborate a little more on that project and when we will be able to hear it?

The project is called "The Knuckle Draggers" & the E.P. will be called "Barbarian Brothers".  The group consist of 3 members which are Stikman of Fury of 5 & Boxcutter fame, Diggy & I.  Stikman is and oldschool hardcore O.G. from Dirty Jersey & is down with the famous BFL crew.  He will be rapping with me on this E.P.  Diggy will be recording & producing the whole E.P. and will D.J. live for us!!!

We are having fun with this project and we are definetly gonna tour on this record in the future!!!  It will be out on ILL-ROC Records. The record is just about 2 O.G. street niggas who spit the truth!!!  Straight street shit!!!
Do you have any plans to come over to the UK and rock a show for your fans over here in the foreseeable future?

I played England a few times already with my hardcore band Skarhead.  I got alot of friends in England and always have a good time when I am there.  Gonna try to do a Skarhead/Wisdom In Chains/Danny Diablo & Skam Dust & Boxcutter!!!

You must have witnessed a lot of crazy shit in your life time. What is THE craziest experience you have ever had on tour?

If you weren’t in the music industry what do you think you would be doing with your life at the moment?

I would of been a cop like my dad or a fire fighter.

It not just music you do right? You also produce, direct, run a label, act, model etc. Do you have any work lined up in any of these areas or are you all about the music at the moment?

I am mostly focusing on my art & acting next year.  I have finished 22 canvases & will be having 2 big art shows next year in NYC & L.A. I will be focusing on my band Crown Of Thornz out of all my music.  I also got a short film that I star as the main character coming out next year and will be working on 3 films acting wise.  My art is graffiti/hardcore/punk rock style!!!  I was an infamous graffiti vandal in the late 80s - mid 90s.  Gonna be mad busy!!!

How would you say the music industry has changed since you first started out in the NYHC scene all those years ago?

All these bands that are signed and making loot suck.  Hatebreed is the only dope hardcore cross over band that has made it!!!  Shout out to my brother Jamey Jasta.  I love that mutha fucker!!!

How would you say you have evolved as an artist and as a person since then?

I have worked so hard in the music game the last 10 years!!!  I have been putting in so much work.  I have evolved as a producer,director & straight grinder!!!  I think I have been really putting in the work cause of my son. My wife is a musician also. She is an amazing singer and her band Eye-Ra-Haze is blowing up.  Sounds like Massive Attack/Portishead meets Quicksand/Deftones!!!  I just want her to blow up so my son and I can chill at home full time!!! Ha Ha Ha.

Who are listening to these days that you would like to recommend to the readers of Darkside Newz?

I ride the J/Z train every fucken day from Queens to Brooklyn so I go with Jay Z!!!  I don't feel Kanye as an artist.  He is a dope producer though..

LOVE A FAT ASS BIG ASS FAKE TITTS!!!  I am a male macho asshole according to my wife!!!  I do also love all natural woman bodies!!!  My wife is fine as fuck!!!

Goodfellas cause it had alot to do with Queens and it was a real story!!!

Damn this is hard decision.  I'm good friend with DJ Lethal so I pick Limp Bizkit when Lethal is in it. If he isn't in it then Linkin Park.

I haven't liked Metallica since Liberty & Justice fo All.  Iron Maiden rules.  Bruce Dickenson can out sing James Hettfield any day. I have to give props to Metallica's bass player Rob.  That dude is a good dude and is from the hardcore scene.  plus he is Latino!!!

Thanks again for taking the time to do this. Is there anything else you would like to add to the Darkside Newz Readers here in the UK?

Thank You guys for even taken interest of who I am and my music.  I am an underground artist who does real street music!!!  I live a crazy life and I am a real street dude.  Music is for everybody.  Music has not just one  color.  There is only good & bad music!!!  I am Puerto Rican & Jewish.  My mom is black as fuck.  I am here on earth to be a good father & to make some hard ass music!!! Fuck racists!!!

Check out my record Danny Diablo - The Blood Of Eden - Out now on ITUNES and you can get the c.d. at www.durtymickrecords.com Plus check out www.eyerahaze.com