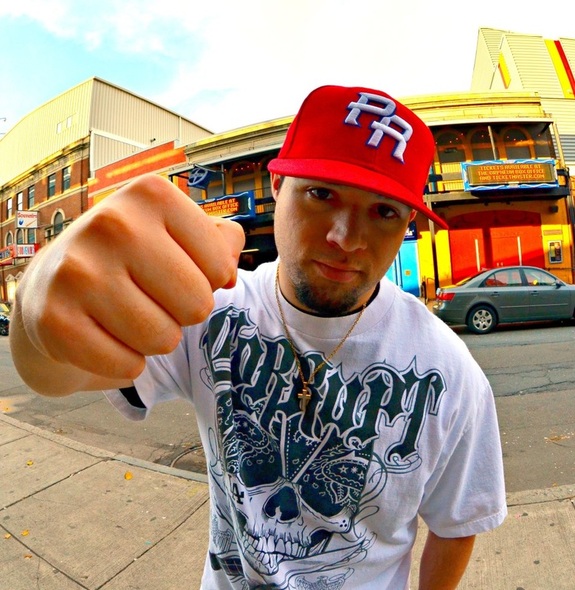 Following up from our last interview I got to deep even deeper into the mind of one of my personal favourite and one of underground hip hop's premier producers: C-Lance of Vinnie Paz's Enemy Soil.

Hey dude, great to speak with you again.
How has 2014 been for you so far?

Whats up man, thanks for having me. 2014 has been really good so far, been the best year musically for me so far. Have a lot of music coming out this year with some of the best artist's out there, so I am really happy with this year so far. My wife is healthy, I'm healthy, life is good.

I know you got a lot of music on the way and it's gonna be a big year for you. What in particular are you most
excited about your fans getting to hear this year?

Even though you have worked with some huge names in the underground now you are still quite interactive with your
fans on social media platforms like facebook, how important do you think fan interaction is for you and musicians
in general?

Funny you asked that because I just posted something like that on Facebook yesterday. I think is very important to interact with your fans, after all they are the reason you have success anyway. I try to reply to every fan on my social media, now a days, it's very important to be active on social networking. These are the people who buy your albums, go to your shows, buy your merch, the LEAST you can do is reply to them on social media. I love interacting with them.

Have you ever met anyone and felt genuinely starstruck?

Haha man, actually yeah, I was down in Puerto Rico with my friend and David Ortiz of the Red Sox just walked right into us haha, we snapped a picture and said what up, he was a nice guy. Being from Boston, that is like meeting the president here. He's done so much for my City.

What do you think personally is the biggest achievment in your life so far?

Getting married, Working with Jedi Mind Tricks and winning a state championship in Baseball.

What song are you most proud of being a part of?

"You Can't Be Neutral on A Moving Train" by Vinnie Paz. That song took forever to make and we had to keep going back n forth through email, text, to get it right, but it came out great.

Last time we spoke you briefly touched on the notion of making a solo production album featuring guest rappers,
has there been any progress on this project?

I wish, but not really. I been so busy working on all these other albums, I can never focus on working on my own album. As a producer, you focus on landing as many placements as you can, and since all the guys I work with drop like 2-3 albums a year, I can never sit down and just do my own record...but one day it will come.

As a UK based website it would be interesting to know if there are any artists over here that you listen to?

Man, actually not really. Most of the rappers I listen to are from the states and a few from Canada. But I am open to anything. I don't care where you're from, dope is dope. Doesn't matter if you're from New York or Egypt.

If the Spice Girls offered you a million bucks to produce a comeback album would you take the job?

Hahahahah wow...Yeah absolutely. Who wouldn't. People who say..."no way!!" are lying to you. We all got families, we have to take care of them.

If you were having a dinner party and could invite any 5 people in the world who would they be?

What is the best and worst bits about being in the music industry?

Best, working with incredible artists, and receiving so much love from all around the globe. When a fan from other countries message me saying our music changed their life or helped their life, that is the best part about making music. The worst part is you have to deal with a lot of idiots, and people who just go on the internet and try to attack you because they can. A lot of hate on the internet.

You've also made your love of horror movies known in the past. There's been a lot of remakes recently such as the Evil Dead and Carrie. Are you a fan of remakes and are there any old horror movies you feel are due to be updated?

I am a fan of remakes. i thought the new Evil Dead was awesome. I loved the Rob Zombie "Halloween" remake. But there have been some terrible ones, like Texas Chainsaw, Carrie kinda blew also. I think we need a legit Texas Chainsaw Remake, and a really good IT remake, which I heard might be coming.

When was the last time you were honestly scared by a movie?

Man, Insidious scared the crap outta me. That movie was really creepy. One movie that haunted me for years was "The Ring" that creepy girly who crawled out of the T.V. man...I still haven't watched it till that day.

If you were a victim of a zombie invasion what would be your survival technique?

Hahahaha...I would try to get to the highest location possible and fire grenade launchers at everyone and everything.


You've also expressed a concern for the welfare of animals, what is about animals you like so much and do you
have any advice to others on ways of raising awareness and helping to prevent any form of animal abuse?

I have to credit to my wife for this, she opened up my eyes to the whole animal abuse thing. I, like most people, was not aware of any of this, but she showed me a lot of documentaries, and has brought me to different protests. I just feel like animals should not be used for the entertainment of humans, do you think Elephants and Lions want to be tied up in the freezing cold doing tricks for some stupid 5 year old kid? No way. Let a wild animal live in their environment. BUT the good news is, Bans and laws are being put in to make this illegal, so good steps so far.

What is the most embarrassing moment in your life?

I do a lot of stupid stuff but I think the most embarrassing moment of my life was when I was in college. I was in a crowded auditorium, and I was walking to my seat and tripped in front of everyone haha. Nobody laughed though, cuz they knew I'd kill them if they did, I think I had on a La Coka Nostra shirt. haha.

If you you found Aladdin's lamp and could have three wishes what would they be?

1. Move to a tropical island with my wife - 2. Produced a album for Eminem - 3. Score a soundtrack for a horror film

If you had to describe yourself in five words what would they be?

Hard Working Never Let Up
I Will finish off with some multiple choice questions:

Krs One or Public Enemy?

Thanks a lot for taking the time to do this interview, is there anything else you would like to add?

Thanks for having me man, yeah just look out for that AOTP album dropping on April 22, Also new Snak The Ripper Album on April 20th. Those are the next records. Peace!