Comedy Rap duo Buckwheat Groats have become something of a viral sensation with their music videos getting hundreds of thousands of views on Youtube. Their unique brand of controversial gangster rap fits somewhere between Lonely Island and the Insane Clown Posse. The latter have just invited them to play at the after party of their annual Hallowicked show in Detroit this Halloween. I was fortunate enough to catch up with Penis Bailey and Lil' Dinky of the group and conduct this interesting little interview via email. 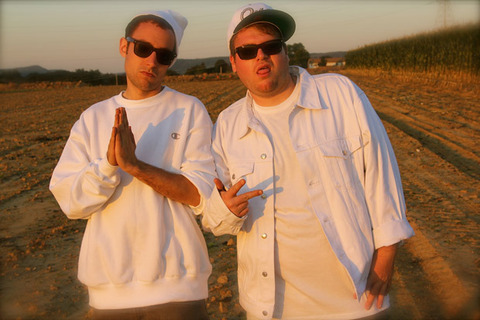 Hey guys, thanks a lot for taking the time to do this interview. For those readers out there that might not know about Buckwheat Groats do you want to introduce yourselves and briefly explain what it is you guys are about?

We are Penis Bailey and Lil Dinky. Originally from Poland, where we labored as cobblers for years before realizing that we needed to leave this life of shoemaking behind to become rap stars. We had also grown tired of polish bitches so we knew we needed to make it to America to graze on the copious amounts of fat asses and titties available here.

What made you call yourself the Buckwheat Groats? and where did you come up with your personal rap names?

We were originally called the Hot Hot Weenie Woopers, and we were hanging out with Michael Phelps one night and he said he didn't like the name and that we should be called the Buckwheat Groats, with members Penis Bailey the Bailey and Lil’ Dinky AKA Deff Janiels. Few people know this, but Lil’ Dinky’s first rap name was “Ace Hood.”  We are currently filing a lawsuit against the rapper from “Bugatti” for unlicensed use of the name.

It was recently announced you will be performing at the Insane Clown Posse's 'Hallowicked After Party' . What are your views on ICP and the Juggalo movement?

We fucks with them heavy. Violent J and Shaggy 2 Dope are true legends in the game we are excited to be back in cahoots with the Juggalo family.

What can those attending expect from a Buckwheat Groats live show?

Our songs have been known to be so powerful that the breasts of women attending our shows often will combust, or explode. So much so that the phrase “protect your tits” has inadvertently become one of our rallying cries. But it’s also a warning.

You played at the gathering of the Juggalos this year as well, how was that for you?

It was great. Our one complaint is that there were not enough mashed potatoes around. Seriously we looked at every fucking food stand and we couldn’t find any mashed potatoes. Thought that was pretty uncool but other than that it was a fuckin movie.
If you could collaborate with any artist in the world no matter how big who would it be and why?

Sheryl Crow. That song about “if it makes you happy” is really catchy

On the flipside, you have released a song called 'take yourself out the game' encouraging a certain type of person to kill themselves. Who do you think at the moment should take the advice given on that song and 'take themselves out the game'?

Michael Phelps. Dude has been acting weird as hell recently

I've seen on the internet that there have been some comparisons between you and the Lonely Island, do you see the resemblance or would you say those people are missing the point of your music?

We have never heard of the Lonely Island

According to your lyrics you guys are pretty good with the ladies, do you have any advice to the less fortunate readers on how to be a hit with the opposite sex?

No. None of you cockboys out here stand a chance. Amazon.com is offering a pretty good blowup doll for $59.99 with free shipping you might wanna look into that.

If you could throw an absolutely crazy Arbor Day party with all the drugs, women and booze you could get your hands on, what 5 celebrities would you invite?

Where is the best place for us over here in the UK to get a hold of your music, every time I type in Buckwheat Groats on Amazon i get some kind of organic grain come up?

Fuck organic grains. We have a Soundcloud you can hear our music at. You can download a couple of the songs at our funny or die page. Hopefully there will be another way to download it soon. We have no idea how any of this shit works

Do you see yourselves playing in Europe any time soon?

What is your response to people that consider your music tasteless, offensive and obscene?

They are obviously ignoring the tender, soul-bearing emotion that goes into every track. We implore them to taste our penises.

I will finish with some random multiple choice questions:

We only watch QVC

We have never heard of either of these

Surfing is literally one of the gayest things you can do


Thanks again for you time. is there any thing else you would like to add to the readers of Darkside Newz?

We got sucked off by news anchor Katie Couric in the back of a limousine at the same time, but we didn’t see each other’s dicks.