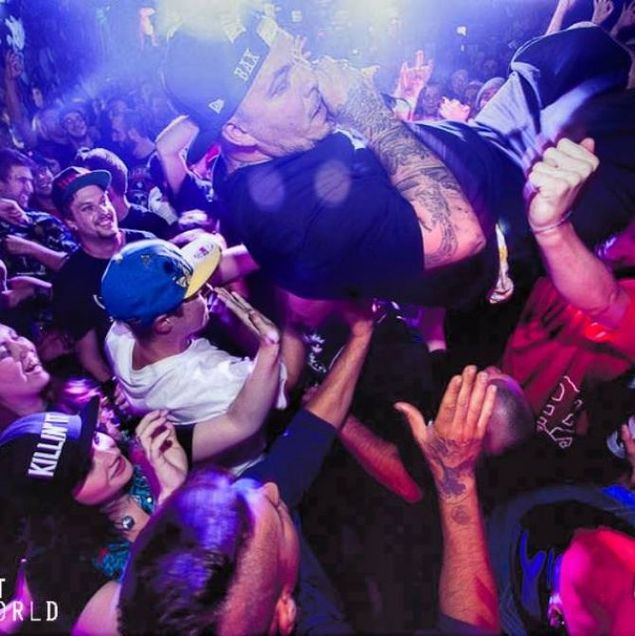 Hey thanks a lot for taking the time to do this interview. For the people out there who might not be familiar with Adlib do you want to introduce yourself and give a brief overview of what it is you do?

What exactly is BaxWar and what is your role?

Battleaxe Warriors is a worldwide family of like minded ppl that have a love and passion for underground culture. We are the first fully documented and organized movement of its kind. We have Not just Hiphop artist, producers Djs etc. But also Extreme sports athletes Mixed Martial Artists, Tattoo and Graff artists and more.. really any creative outlets are involved. What makes us different is that you dont have to be a artist to be involved, members can also simply just support these arts. So basically people from all walks of life are involved making it a great way to find people in your area that have similar intetrestS. It was created by Madchild of Swollen Members as a way to bring our scenes together we now have over 5000 members worldwide including guys like Slaine of La Coka Nostra, UG of Cella Dwellas and Kevin Zinger

How did you become involved in the movement?

I worked wit Madchild on a record and we just hit it off, we started talking on phone on a regualar and as he expland the movement I was all in.. I'm thankful and honored that he put me in a lead position and I dont take it lightly.

How has your time on the Lawnmower Man tour with Slaine and Madchild been?

LMM Tour was amazing.. Every city was nothing but love, it was great to met so many solid people across Canada and was a honor to share a bus with these guys.. We really all had a blast it was really a team.. No egos we all just had a blast.. Those guys are my brothers for life

Whats the craziest thing you have ever experienced on tour?

I been on a lot of tours and saw a lot of crazy shit around the world!! everything from riots to strippers and anything you could imagine in between!

'Bad Newz' was released earlier this year, how has the response been to that?

The responce has been great! I appreciate all the love I recieved this year.. It was a special day seeing my son amd Ma dukes seeing my record in chain stores like Bestbuy FYE Kmart etc..

It features some underground legends on there like Vinnie Paz and Madchild, if you could work with anyone in the world no matter how big who would it be?

Was there any particular moment in your life when you got that kind of ‘eureka’ moment and realized that music was what you wanted to do?

Without a doubt, standing alone on stage in front of 25,000 people in Switzerland.. That 10 min changed my life.

What do you think you would be doing with your life if you weren't doing music?

What is next for Adlib?

I have been writing and hope to release a new project summer 2014.. I just released a mixtape "Balboa" for FREE on Sensi-Starr.com and I will be sending Autographed hard copys to the first 100 people that Pre-order J.O the Last Mans debut album "The Mushroom Chronicles VI"

What other rappers are you feeling at the moment?

If you had a time machine and could go back to any moment in time, where would you go and why?

With all honesty I'd stay were I am!! I'm having a great time right now.. Maybe early 90s tho.. Just to get extra wreckless for a day.

I am going to finish up with some multiple choice questions now:
Bush or Obama?

Bizkit, but ONLY for Dj Lethal!!

Thanks again for doing this interview, is there anything else you would like to add?